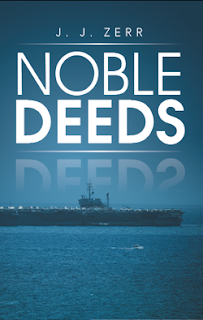 Coffee and Critique member extraordinaire Jack Zerr will be a featured speaker at 7 p.m. on November 11 at Duchesne High School in St. Charles, Missouri, for a Veterans' Day talk and book signing event. His presentation will be on “Life on an Aircraft Carrier.”
Zerr graduated from Duchesne in 1959 and entered the navy, where he served for thirty-six years, most of that time as a carrier pilot.


Following the presentation, Zerr will discuss his latest novel: “Noble Deeds.” The story involves a commanding officer taking his ship to sea for the first time and experiencing a devastating fire.


Zerr was asked what inspired him to become a writer, he said, “Sister Mathew. She taught me literature and creative writing my junior year at DHS. I also consider her to be the first drill instructor I encountered. She gave me an F as a mid-semester grade. I told her I should have gotten a C. She told me I should have gotten an A, and that for the semester I’d get either an A or an F. I did not get an F. Sister Mathew. That’s why I wanted to do this event here at DHS. I appreciate the DHS administration allowing me the opportunity.”


Copies of Zerr’s book will be for sale. All proceeds will benefit Duchesne High School.
In addition, everyone who buys a book will get a chance to win an iPad.