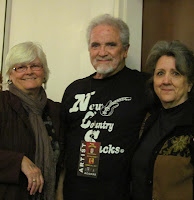 Nick is a gifted writer and a local Country Music legend, with a 1970s chart-topping album and a long list of Billboard singles.

Nick's thoughtful and candid critiques and his unique and haunting writing voice make him a cherished member of Coffee and Critique.

Due to his health he hasn't been able to grace our critique group table at the Rendezvous Café for several months, but he keeps in touch through e-mails and is always with us in spirit.

The photo above is of Nick Nixon with Donna Volkenannt (that's me) and Lou Turner at a tribute for Nick last fall.

Nick's memoir, "Dreams Worked Magic," is available on his website and from his publisher, High Hill Press.

The following are my "take ten" interview questions and Nick's answers, along with his own bonus question and answer.

1. What inspired you to become a writer?

Nick: Aspiring young writer Jerry Tucker was a friend of mine, we lived in the same apartment building.  He wanted to be the next Ernest Hemingway.  We each had jobs, but for quite a while neither could afford a television.  Occasionally, to pass the time, he would read his Hemingway efforts, some were good.  I even penciled a few things of my own but was reluctant to share them for fear he'd find them simple.


As far as my writing that's the way it went for the next 25 years.  Then one day the idea came to me again when another friend of mine, Nick Barry, encouraged me to contact local writing groups. I joined Coffee and Critique and Saturday Writers, and they soon gave me the confidence I needed to write freely.  I showed some of my pieces to an older Jerry Tucker and he in turn encouraged me as well.


2. What is your writing specialty?
Nick: Personal essays, short stories, and memoirs.


3. How would you describe your writing process?
Nick: When the mood strikes.


4. What’s the best part about being a writer?  The worst part?
Nick: The best is the opportunity to be creative.   The worst: Trying to type, I don’t like the typing.


5. What the best writing advice you’ve received?  The worst?
Nick: The best is write the way you talk.  Worry about the spelling later.  The worst:  Someone told me I needed an education first.


6. Which books on writing can you recommend for other writers?
Nick: I don’t know.


7. How has belonging to Coffee & Critique effected you as a writer?
Nick: They gave me the confidence I needed to write freely.


8. Which writing awards mean the most to you?
Nick: My first writing award meant the most. “July the Wonder Dog" won first place in a Saturday Writers’ short story contest.


10, What is your writing dream?
Nick: I’d like to interview Abraham Lincoln and write for the Lone Ranger. I would ask Abe how many times he re-wrote the “Gettysburg Address,” and did he feel confident about its content.


And, finally, Nick came up with his own bonus question:
Nick: How long would you like to live?  Nick: As long as it takes to write the Nick Nixon memoirs.
There's not much I can add to Nick's answers, except to say, isn't he amazing!
Posted by Unknown at 4:03 PM 11 comments:

There's lots of exciting news for members of Coffee and Critique this weekend.

Jack Zerr and Janet Bettag, two regular members of our wonderful critique group -- and both award-winning writers -- will be among a trio of authors signing books in St. Charles on Saturday.

Jack Zerr is a former Navy Admiral, jet pilot, and Vietnam Veteran. He will be signing copies of Sundown Town Duty Station and The Ensign Locker. If you enjoy reading books about military life, Jack's books are just the ticket.

Janet Bettag will be signing copies of her book Normal, a true story about her survival after a ruptured cerebral aneurysm. Janet is an accomplished writer whose book has been described as "amazing" and "inspirational."

Jack and Janet, along with local writer Ann Hazelwood, will be signing copies of their books on Saturday, June 1, from 8 till 11 a.m. at the Parkview Gardens Florist and Greenhouse, which is located at 1925 Randolph in St. Charles.

I just visited the florist's website, and it is lovely.

How fitting that two writers like Jack and Janet will be signing books there. Janet is quite the gardener, and I remember reading a story about Jack and an incident he had mowing his lawn.

Another former member of Coffee and Critique, and an award-winning writer, will be part of a book signing on Sunday .

Sioux Roslawski is a full-time teacher who has attended C&C in the past during her summer vacations. Sioux is funny and smart and generous. She will be among a group of local writers signing copies of Not Your Mother's Book on Travel on Sunday, June 2 from 1-3 p.m. at Main Street Books in St. Charles. Other local writers participating in Sunday's event are Linda O'Connell and Sheree Nielsen.

I'm leaving to go out of town on Sunday and have a full day of activities lined up on Saturday, so I won't be able to make the signings. But if anyone in the St. Charles-St. Louis area has some free time, these are all great writers who would appreciate your support, even if it's just to stop by and say "Hi."

To all the local writers with book signings this weekend, I hope you sell lots of books -- so many that your fingers get cramped from signing them all.

I'm just kidding about the last part of that sentence; you need those fingers for writing and typing.
Posted by Unknown at 7:13 AM 3 comments:

Take Ten with Coffee and Critique - First Up, Doyle Suit 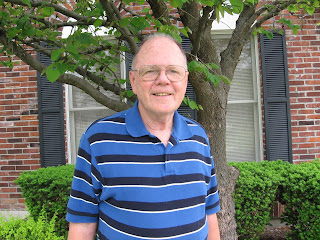 
The Take Ten feature includes an introduction and a bio of the member, followed by an interview with ten questions, plus one bonus question.


First up is Doyle Suit, interviewed by Donna Volkenannt.


Doyle is a cherished and loyal member of C&C. He has belonged to C&C since the group's founding in 2007 by Donna Volkenannt and Lou Turner.


Introduction: We can always rely on Doyle to share a great story and give insightful and thorough critiques. Friendly and welcoming to all members, Doyle embodies the Coffee and Critique motto of being "candid but kind."


Bio: Doyle and his lovely wife of a half century live in St. Charles, MO near their children and grandchildren. He and his wife play golf and bridge and enjoy bluegrass music. Doyle's stories appear in Cactus Country, Thin Threads, Our Favorite Pets, My Dad is my Hero, Bigfoot Confidential, Cuivre River Anthologies, and various magazines.
Interview: Here are Doyle Suit's Take Ten Q&A with Coffee and Critique:

1. What inspired you to become a writer?
Doyle:  I can’t pinpoint a single inspiration. A high school English teacher sparked my interest in literature. Failed attempts to write when I was younger made me want to improve my skills. Family members who were published encouraged me. Finally, writing technical proposals in the aircraft industry sounded like a good background for fiction writing. It didn't quite work that way.
2. What is your writing specialty?
Doyle: I write primarily novels and short stories, but occasionally I get sidetracked into writing memoirs, essays, articles, or even songs.
3 What is your writing process?

Doyle: I write almost every day and avoid detailed outlines. The seat of the pants method usually works for me. Deadlines tend to improve my efficiency.
4. What is the best part of being a writer? The worst part?
Doyle: The best part of being a writer is satisfying an itch to create stories. The worst part is waiting for a publisher to decide, or maybe it’s people who tell me writing is a nice hobby.
5. What is the best writing advice you’ve received?  The worst?
Doyle: The best advice I’ve received is to apply my butt to a chair and don’t let the truth get in the way of telling a good story. The worst is encouragement to write whatever I think will sell.
6. Which books on writing can you recommend for other writers?
Doyle: Numerous books can be helpful. My standbys are Plain English Handbook, Roget’s Thesaurus and The Elements of Style.
7. How has belonging to Coffee and Critique benefitted you?
Doyle: Constructive advice from talented writers at Coffee and Critique fostered discipline to pay attention to fundamentals and write about what’s important to me.
8. If you’ve been published or have won awards, which are the most special to you?
Doyle: I’m proud of all my publications and awards. Having my work included in My Dad is my Hero, Thin Threads, Cactus Country, Bigfoot Confidential, and Cuivre River Anthologies is special. My YA novel, Baker Mountain, will be published in the near future. First place award for Saturday Writers short story contest and Springfield Writers Guild Jim Stone Fiction Award grace the walls of my office.
9. What three words best describe you?
Doyle: Right-brained Engineer
10. What is your writing dream?
Doyle: I want to publish work that entertains and reinforces values like self-reliance, honesty, thrift and respect for others. These were expected when I grew up. I fear they are not sufficiently emphasized in today’s world.
Bonus question: Anything you’d like to add?
Doyle: To those who suggest I’d be better served to do real work instead of writing stories, writing is work. I learned the hard way.
Thank you, Doyle, for giving us a glimpse into your writing world and for sharing your wisdom.
To learn more about Doyle, visit his website http://www.doylesuitstoryteller.com
Posted by Unknown at 8:48 AM 9 comments:

Bill Mueller Did What? Again? And a Random Quote

Yep, Coffee and Critique's own W. E. (Bill) Mueller has done it again. Won another big award, that is.

Winners were announced on May 6.

Entries were judged by Richard Newman, editor of River Styx.


Here's a quote from last week's Coffee and Critique:
"The fiction part is true." The statement was amended to, "The science part is true."
Posted by Unknown at 10:39 PM 2 comments: